Early preaching at Bourton
It was during this period, in 1741, before he accepted a full call that, according to William Newman (1773-1835), there was "a great awakening in Beddome’s congregation at Bourton. Forty persons were brought to repentance at the same time, and Mr Ryland was among them." (William Newman, Rylandiana: reminiscences relating to the Rev John Ryland AM, London, George Whightman, 1835, 3). The reference is to John Collett Ryland (1723-1792), a young man who, despite his godly forbears, had shown no interest in the things of God until this point. He preferred playing cards to hearing sermons. However, the Lord saved him and he himself went on to be a leading Baptist minister. In October, 1742 he joined the church and in February 1744 began training for the ministry in Bristol.
He wrote in his diary for June 25, 1741, "'Surely Mr Benjamin Beddome is an instance of the existence of God and the truth of the Christian Religion. What could change his heart and induce him to leave his profession or trade - what could have him to stay at Bourton rather than to go to Exeter to which he was strongly solicited – what is it that moves him to preach, pray and be so active? Is it not the delight he finds in the work – ’Tis plain that it is not worldly interest." (Quoted, H Wheeler Robinson, London, Methuen, nd, from the Ryland Diary, 2, now in the Angus Library).
All this was while Beddome was still learning his craft as a preacher. He preached effectively but at times his tongue ran away with him so that he could not be understood and, like many a young preacher, he could be insensitive and abrasive and often over long. His father wrote to him on more than one occasion about this. ‘If you would make them shorter, and less crowded with matter’ he wrote of the sermons on May 17, 1742, ‘it would be more acceptable and edifying to your hearers, and more safe and easy for yourself.’ He says 'If you deliver the great truths of the gospel with calmness and with a soft, mellow voice, they will drop as the gentle rain or dew. For the good of souls, then, and for your own good, be persuaded to strive after this.' He wrote a few weeks later in the same vein, 'I ... carefully press you, to strive with all your might to soften your voice and shorten your sermons ... Let two hours be the longest time you spend in the pulpit at any place.’ (Brooks, 24, 25).
There were around 70 or 80 members at Bourton when Beddome first preached there, many coming in from the neighbouring villages, some from as far as 15 miles away, quite a distance to travel in inclement weather. Under this enthusiastic, if still immature, young preacher the congregation and membership grew markedly. In May 1743 some 48 new people joined the church, bringing the membership to 113. Shortly after that, the travelling backward and forward between the Cotswolds and Warwickshire came to an end and Beddome agreed to be the regular ‘teaching elder’ at Bourton.
He was ordained on Monday, September 23 of that year. Bernard Foskett preached the charge, from 1 Timothy 4:12, Let no man despise thy youth, and one of the most eloquent preachers of the day, Joseph Stennett (1692-1758), preached to the church from Hebrews 13:17 Obey them that have the rule over you. It seems that it was Stennett's church that licensed Beddome to preach in February, 1740. (Stennett was the grandson of Edward Stennett [d 1691], son of Joseph Stennett 1663-1713 and father of a fellow Bristol student of Beddome's Joseph Stennett 1717-1769 as well as Samuel Stennett 1727-1795. He began in Abergavenny and was in Exeter for about 16 years, taking a strong stand against Peirce and Hallet in what later became the Salters Hall controversy. In 1637 he moved to Little Wild Street. In 1754 Edinburgh university made him a DD).
Messers John Haydon (1714-1782) of Shortwood (later Tewkesbury), Edward Cooke (d 1770) of Pershore and William Fuller (d 1745) of Abingdon prayed. Beddome’s father was unable to be present but wrote promising his prayers and good wishes. The week before, the church had produced a formal written call to their ‘beloved brother Benjamin Beddome, to the office of teaching elder to us’. (Brooks, 24. See ms Bourton Church Book 1719-1802, 67, preserved in the archive of the Angus Library. Haykin has inadvertently written ‘preaching elder’, 172. The book says ‘teaching elder’ as do Brooks and Holmes). They also made quite clear that they would not stand in his way should there be a call from elsewhere. His duties included supplying the nearby church at Stow, which had recently come under the Bourton oversight when its membership had fallen below 25. According to Brooks there were soon a hundred members coming in from at least 20 parishes in the neighbourhood. (Brooks, 29. With Bourton and Stow, he mentions Barton, Broadwell, Burford, Clapton, Dunnington, Farmington, Hawling, Icomb, Longborough, Naunton, Salperton, Swell, Chipping and Hook Norton, Great and Little Rissington).
Brooks comments that ‘It was not a light thing, in a secluded village, to have secured for so many years the service of Benjamin Beddome’. (Brooks, 31. The rural nature of Bourton comes out in references in the church books to church meetings being postponed because of harvest. In 1787 there was no church meeting for three months due to the hay and corn harvests, Bourton Church Book 1765-1920, 67. Beddome’s hymn book contains 3 fine forgotten harvest hymns. Cf 728-730).
That same year Benjamin Beddome preached for the first time at the Midland Association meetings in Leominster. (The church always attended midland association rather than western association meetings to the south or Abingdon ones to the east. This is due to Bourton’s 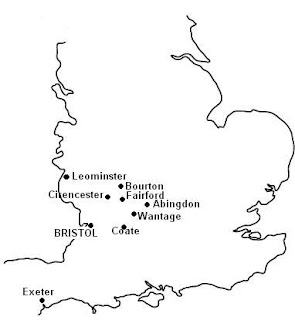 geography, it being in north Gloucestershire and its relatively early founding. In the period 1774-1788 a ‘double lecture’ was established six months in every year (with the churches at Abingdon, Cirencester, Coate, Fairford and Wantage). He went on to preach another 16 times at such gatherings over the next 46 years. He had obviously taken his father’s advice and was very often in demand as a preacher.
From Ryland’s diary, quoted above, we know that there had been a request to pastor in Exeter. In October 1748, his father had the idea of Benjamin coming to Bristol as his assistant. Benjamin knew Bristol well and his father employed all sorts of arguments, including the emotive ‘It would be a great comfort to your mother to sit under your ministry’ to try and entice him back to the big city. (See Dix). But his son would not be persuaded. As we shall see, this was not to be the last time he was asked to leave Bourton.