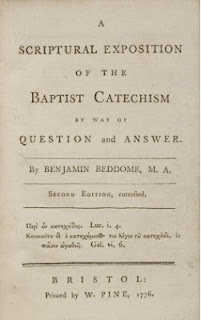 A notice on the Internet now removed was as follows:

A Scriptural Exposition of the Baptist Catechism By Way of Question and Answer.

The first edition of 1752 is known only from a single copy, at Regent's Park Oxford. This second edition is recorded at nine locations, but there is only one in the USA, at Andover Newton Theological School.

Benjamin Beddome (1717-1795) was pastor at the Baptist Church in Bourton on the Water, Gloucestershire, from 1740 until his death. He wrote over 800 hymns, which were published as Hymns Adopted to Public Worship or Family Devotion in 1818. In 1770 he was awarded an MA by Providence College in Rhode Island in recognition of his literary gifts.

With a neat ink inscription inside the front cover: "G.P. Hinton the 28th May 1804. The Gift of his very Dear Friend the Rev. Dr Ryland. Note this Book is very useful to Ministers & Students to the Ministry for here they may look for Answers in Scripture Language to whatever questions they are answered on whatever subject they may be upon".
(Hinton appears to have been a Unitarian who was once a minister of a west country church but then went into the legal profession in Bristol.)