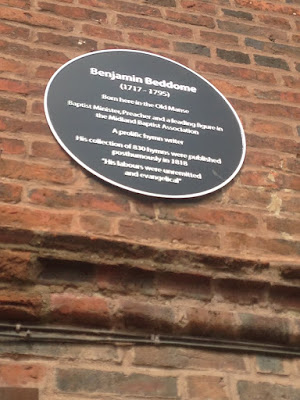 I was unaware of this plaque to Beddome in Henley-in Arden, which has been noted here by Ian MacDonald. The plaque says
Benjamin Beddome (1717-1795)
Born here in the Old Manse
Baptist minister, preacher and leading figure in
the Midland Baptist Association
A prolific hymn writer
His collection of 830 hymns were published
posthumously in 1818
"His labours were unremitted
and evangelical"
The plaque was put up by the local parish council. They say here that on June 3 this year

At 11.45, we had our first plaque unveiling adjacent to the Baptist Church – the location was significant as it was to remember 300th anniversary of Benjamin Beddome, a Baptist minister and prolific hymn writer – 830 hymns have been credited to him (excuse the pun). The citation was read by Norman Kench, High Bailiff and supported by Gordon Trinder, a previous Town Crier and High Bailiff, as well as Baptist Church Lay Reader. At this point the Group was also joined by Clive Rickards, Chairman Warwickshire Council, as well as Chris Saint & George Atkinson, Leader & Chairman of Stratford District Council respectively, as well Stephen Thirlwell, Deputy Leader of Stratford Council and Bill Leech, Chairman of the JPC Henley. 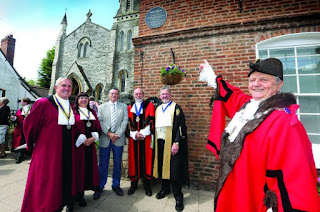 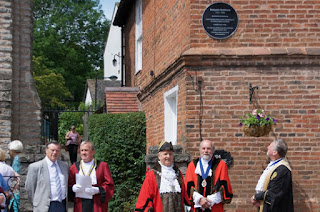