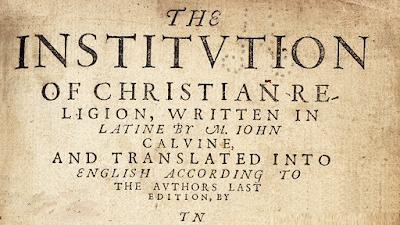 In the volume The Lost Sermons of C. H. Spurgeon Volume II: A Critical Edition of His Earliest Outlines and Sermons between 1851 and 1854 by Christian T George a footnote is found, It says

"The human mind is, so to speak, a perpetual forge of idols" (Henry Beveridge, trans., Institutes of the Christian Religion by John Calvin, Volume 1 [London: James Clarke & Co., Limited, n.d.], 97). Charles later acquired Benjamin Beddome's copy of Calvin's Institutes in which is found, "Wherby we may gather that the wit of man is, as I may so call it, a continuall worship of idols" (The Institution of Christian Religion, Written in Latine by Master John Calvine, and Translated into English Accordyng to the Authors Last Edition, by T N. Wherunto Is Added a Table, to Fynde the Principal! Matters Entreated of in Thy Boke, Conteyning by Order of Common Places, the Summe of the Whole Doctrine Taught in the Same, Seen and Allowed According to the Order Appointed in the Queenes Maiesties Injunctions [imprinted at London in White Crosse Strete by Richard Harrison, 1562, The Spurgeon Library], 25). The Latin reads, "Unde colligere licit hominis ingenium perpetuam, ut its loquar, ase idolorum fabricam" (A. Tholuck, trans., loannis Calvini, Institutio Christianae Religionis: Cum Brevi Annotatione Atque Indicibus Locupletissimis ad Editionem Amstelodamensem Accuratissime Excribi Curavit, Pars Prior [Berolini: Apud Gustanum Eichler, 1834], 79).