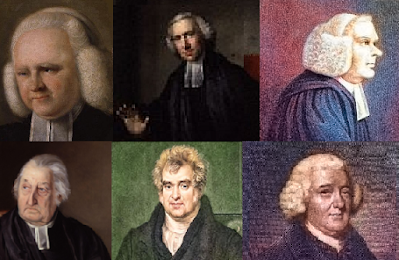 When the Eclectic Society met in January 1799 they discussed what made preachers popular or unpopular. At the beginning John Bacon listed a number of preachers of the day and what made them popular. Here are ten
1. [George] Whitfield was remarkable for feeling, susceptibility, force
2. [William] Romaine for realizing faith; he had one subject indeed but this was the panacea; there was some variety.
3. [John] Berridge gained in some degree from the place in which he preached; he was always in populous places; simplicity was his one object
4. Rowland Hill is irregular extravagant bawling &c yet something extraordinary; upright, devoted, comes out; fire, brilliance, genius; talks rather than preaches; strong comparisons but they interest; stories.
5. [William] Jay has great natural powers, memory
6. [Samuel] Medley had some party in his spirit; glib, jocular.
7. [William] Huntington had promptitude, was easy, pleasant, fanciful like a harlequin
8. [Henry] Venn of Huddersfield some tone but remarkably fiery; current; realizing; heavenly; rapturous, holy, quickening.
9. [John] Wesley good sense, promptitude, clear, treats all circumstances as belonging to a system not that in his ministry which would independently have been popular.
10. [Robert] Robinson of Cambridge had ease comprehension, no turns or twists but new views of things &c
(He also mentions forgotten preachers [Jehoiada] Brewer - possessed moderate talents but pathos was fervent affectionate savoury no peculiar tone to obstruct and rather aided his manner encouragement to diligence was one of his frequent topics perhaps compared with the drawling manner of some other dissenters he may be classed as above the average; [William Bromley] Cadogan - had no variety tone or dash but perception of subject determination sawing through energy reality he took by force the one object he kept in view; [William Alphonsus] Gunn - without extraordinary talents but gives direction and application to the truth no tone or twang addresses this and the other evidently a good man his preaching is not treating the subject so much as dealing in address deals in general truths; [James] Fordyce - an orator but it looked not like the real thing; gilded but it wore off. He also gives the names - [William] Dodd, Harrison and Hodgson)