Progress and decline at Bourton
The church continued to grow after 1750 but with some variation. By recourse to the church books (now preserved in the Angus Library archive in Oxford) Brooks analysed the membership figures, observing that although by 1751 there were 180 members, the next 14 years were variable. The Association Letters speak in 1751 of ‘decay’ despite the ‘large auditory’, in 1753 of languor and in 1755 of ‘coldness yet a little strength’ (Bourton Church book 1719-1802). None were added from 1752 to 1754, bringing numbers down to 162. Then in 1755, some 22 were baptised. By 1759 there were 160 members. This too was followed by a dearth until 1764, when some 28 were added. Over 200 baptisms had taken place since Beddome’s coming by 1766 and the number of members had again risen to 196. It had been necessary to undertake a major enlargement of the premises in 1764 and 1765. 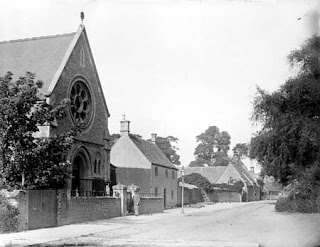 [Pic: Baptist chapel 1890 (built 1876)]
Over the next 30 years, however, there was a relative decline with only 53 added by baptism and six by letter. Some 105 died, 12 moved to other churches and two were excluded. One notes in the 1780s references in the church book to poorly attended church meetings and the need to revive the midweek meeting, suggestive of a measure of spiritual languor. At the prompting no doubt of former member John Ryland, in 1784 the church did agree to follow the example of the Northamptonshire Association and join in the concert for prayer but little seems to have come of this as far as Bourton itself was concerned. (For evidence of a post-millennial outlook in Beddome, see Hymn 707; see a further post). In over half of the 30 years, 1765-1795, there were no additions. From 1765-1772 there was only one year that saw any addition. In 1775, 1777, 1783 and 1786 there were again no additions and in 1790-1795, again only one year saw any increase. Brooks says that by 1786 they were down to a hundred members. (Cf note in Holmes, 62). By the time of Beddome’s death there were 123 members on the roll, although congregations apparently continued to be large with five or six hundred attending.