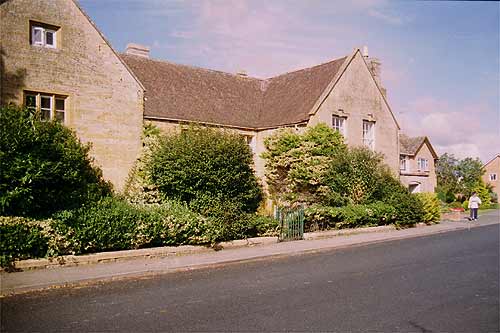 John Seward (b 1668) is described by Arnold Dallimore in his biography of Whitefield as ‘a country squire’. He and his wife Mary moved to Badsey, near Evesham, Worcestershire, in the late seventeenth century. They were Anglicans and had as many as seven sons. The large stone house that would be the family home for the next hundred years is still known as Seward House today [see pic].
Their most famous son was their fourth, William Seward (1702-1740), ‘the first martyr of Methodism’. In the 1720s he moved to London where he became a successful stockbroker. A religious man active in promoting charity schools, in 1738, following his wife’s death and a spiritual awakening, he met Charles Wesley at the Fetter Lane assembly. He was soon converted and became a generous financial supporter of Methodist causes, a source of some tension with his family and eventually some consternation to himself. He soon became a very close companion to George Whitefield. Dallimore speaks of ‘an exceptionally earnest Christian and a most faithful helper’ who ‘served the Lord with a flaming devotion’. In 1739 he accompanied Whitefield to Georgia as what the ODNB calls a 'fund-raiser, business co-ordinator, and publicist'. He organised printed support in England, including 'paid newspaper advertisements purporting to be news articles'. He did this on both sides of the Atlantic. He sent a poem to colonial newspapers, the first stanza of which ran
Whitefield, the great the pleasing Name,
Has all my soul possest,
For sure some Seraph from above
Inspires his Godlike Breast.(Trefeca MS 3174)

He returned to Britain in 1740, among other things, to raise funds for the Orphan House and negotiate with the Georgia trustees concerning several important matters, including urging the use of black slaves in the new colony.
He also began open-air evangelistic preaching, something for which he was probably not suited. Preaching with Hywel Harris in South Wales he encountered hostile crowds and was injured. Then, in the October, at Hay-on-Wye, he was heavily stoned by a violent mob. A few days later he died from a wound to the head. He is buried near Hay, in the village churchyard at Cusop. Dallimore commends his zeal but questions how much it was according to knowledge and speaks of his baneful influence on Whitefield. Seward died intestate and although he had provided for his only daughter, all the help he had previously been giving to Whitefield now suddenly dried up. The debt on the Georgia orphanage became something of an albatross around Whitefield’s neck.
Little is known of the second son Edward Seward. Two other brothers, Francis Seward (d 1732) and Thomas Seward (1708-1790. See ODNB) became Anglican ministers and remained unsympathetic to Methodism. In his journal John Wesley apparently speaks of Thomas as ‘pleasure- and preferment-seeking’. The eldest surviving brother, Henry Seward (b 1695, a yet older son John Seward died in 1728) married a Mary White of Wickhamford when he was 60 (1755), and, according to Tyerman’s biography of Whitefield, was a violent opponent of Methodism. In his journal, Charles Wesley describes threats and even actual physical violence from Henry during his brother Benjamin’s illness, the illness he sustained just prior to his conversion.
Benjamin Seward (d 1753), the sixth son, was converted after his brother William, having also been upright and religious beforehand. He had been an older contemporary of Charles Wesley at Westminster School. An intelligent man, he was a graduate of Balliol College, Cambridge. In his journal for April 1739, Whitefield writes about Benjamin’s earlier opposition to Methodism. He told Whitefield that he had once planned to write ‘against Mr Law’s enthusiastic notions in his Christian Perfection.’ Apparently his conversion followed a week in bed with fever. Besides the undoubted influence of his brother, ‘God sent a poor travelling woman, that came to sell straw toys, to instruct him in the nature of the second birth’. At this early stage he was set on entering the Anglican ministry but that did not happen. Whitefield saw him as a typical example of how far a man may go in religion and yet not be saved, remarks which he later had to defend to the Anglican hierarchy.
Both Benjamin and his wife Elizabeth went on to be members of the Baptist church at Bengeworth near Evesham, where John Beddome had once ministered. Even by August, 1739, when Charles Wesley visited Evesham and stayed with them, they had already come to a Particular Baptist persuasion. Wesley describes in his journal how Benjamin, unlike his wife, appeared sympathetic to the Arminian scheme – ‘polite’ would perhaps be more accurate. She, says Wesley, ‘refuses to see me,’ and ‘is miserably bigoted to the particular scheme’. He adds later
‘Here I cannot but observe the narrow spirit of those that hold particular redemption. I have had no disputes with them, yet they have me in abomination. Mrs Seward is irreconcilably angry with me; ‘for he offers Christ to all’. Her maids are of the same spirit; and their Baptist teacher insisted that I ought to have my gown stripped over my ear.
When Mr Seward, in my hearing, exhorted one of the maids to a concern for her salvation, she answered, ‘It was to no purpose; she could do nothing.’ The same answer he received from his daughter, of seven years old. See the genuine fruits of this blessed doctrine!’
Benjamin Seward was eventually baptised in 1742, his wife probably earlier.
One other thing to note about Benjamin is that he wrote at least one hymn. Six verses are quoted by Tyerman. It begins

Come blessed Jesus quickly come
And mark the bright celestial way
Within my breast erect thy throne
Nor let me fain through long delay.

In 1753 Benjamin and then Elizabeth Seward both died. John Gill was the preacher at Benjamin’s funeral. Gill spoke of him as 'a gentleman of fine natural parts and good sense; he had a peculiar sweetness of temper, scarce ever known to be ruffled, discomposed, fretful and impatient, upon any occasion; which singular good nature, as it is commonly called, adorned with the grace of God, set him in a most amiable light, and caused him to shine in a most pleasing manner to all that knew him.' His humility and generosity were also praised.
In her will Elizabeth devoted the proceeds of the settled interest of a sum of £4,550 to charitable purposes to benefit the ministers and the poor of various Baptist causes. This charitable trust was to be overseen by seven Baptist ministers, including the minister at Bengeworth, Jacob Mower; Dr John Gill and Benjamin Beddome. Beddome not only had fraternal links with the Bengeworth church but was a very good friend of the will’s two executors, Bourton residents Richard Hall and William Snooke. Hall and Snook were sons-in-law to Benjamin and Elizabeth Seward. Holmes refers to Sister Hardiman as one who, despite her behaviour, benefited from the Seward fund.
The Sewards had two daughters. We have previously indicated how Frances and Elinor, respectively, married William Snooke and Richard Hall and came to live in Bourton. In a fascinating anecdote written by Caroline Mary Griffith, in Bath, on June 6th, 1912, (found here) for a relative in Brisbane, Australia, she recalls a family story that says that 'the two friends, Richard Hall and William Snooke, were ‘gentlemen’, and rather eccentric ones, of Bourton on the Water. My aunt used to tell a story of some extraordinary arrangement they made between themselves, (based on the expectation that one sister, who was delicate, would die first), in order to keep the Seward property to which their wives were heiresses, from going out of the family. But the wrong sister died, with the result that the usual fate of the Griffiths in money matters happened, ie not much of the property came to that side of the family in (sic) which our great grandmother Martha Hall belonged.'
The arrangement sounds more like village gossip than a reliable fact but is interesting nevertheless. Martha was the first of three children born to Richard and Elinor, the other two being boys. The same article speaks of the Sewards as cultured and wealthy people and suggests correctly that Anna Seward, the poetess, was aunt to Elinor and Frances.
The Halls were not living in Bourton in 1764 although they were frequent visitors. In the archive at the Angus Library there is a letter from Beddome, dated February 18th, to ‘Richard Hall, hosier, of Red Lion Street, Southwark’. Written on a Saturday afternoon, this friendly letter asks Hall to purchase stock to the value of £100 and also mentions Mr Snooke. It has the greeting ‘to my good friend Mrs Hall’ and contains a hymn for her ‘By night, by day, at home, abroad’. Presumably Beddome had just completed it for singing the next day. The hymn is Hymn 498 in the posthumous hymnal.
The Snookes had four girls – Sophy, Eliza, Maria and Martha. Richard had two sons and a daughter. Following Elinor’s death in 1780, did Richard marry Martha Snooke, to whom Anna Nancy and Benjamin Snooke were born? Actually it was William Snooke's sister, Betty Snooke (1743–1818). Their son Richard was father to Benjamin Snooke Hall who became a member at Bourton and went on to minister at Burford in 1830, according to Holmes. He was a subscriber to the book of Beddome sermons published in 1825.
(Main sources: Journals of Charles Wesley and George Whitefield; Tyerman and Dallimore’s biographies of Whitefield; letter in Angus Library Archive. Online materials including this one)

In the Original posting "Following Eleanor’s death in 1780, did Richard marry Martha Snook, to whom Anna Nancy and Benjamin Snooke were born?"

Answer: Richard Hall married Elizabeth (Betty or Betsy)Snooke, sister of his brother in law, William Snooke, on 14 December 1780 at Bourton on the Water, GLS. Richard & Elizabeth were the parents of Anna Nancy Hall & Benjamin Snooke Hall.