For some reason I've never included anything on Beddome's grave. On findagrave under Beddome's name I found three pictures and some text. The first picture is of a headstone.
Underneath it says 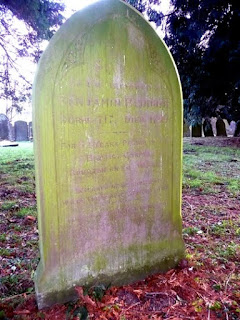 The rather moss-covered memorial stone to Rev Benjamin Beddome in the Old Burying Ground, Bourton on the Water. The inscription reads: Sacred to the Memory of Benjamin Beddome Born 1717 Died 1795 For 52 years Pastor of the Baptist Chapel Interred near this spot where the chapel formerly stood This stone was erected by his great grandchildren.

Labels: Bourton on the Water, Grave