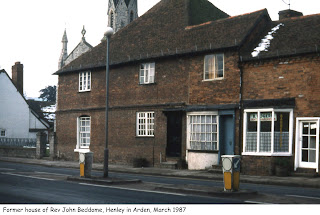 Again courtesy of Mrs N, this the house in Henley in Arden that was bought by Rev John Beddome. The house was set up by Rev John as part residence and part meeting house. It is where Benjamin Beddome and his siblings were born - up to the time the family moved to Bristol in 1724. The Baptist Church at Henley was built next to this house and remained as the pastor's house. Apparently the house was sold some years ago. According to the licence granted to John Beddome to hold meetings there, it had originally been a large inn called Holmes House.