Signatures of the family 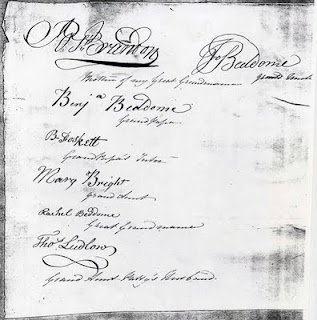 In the 19th century many of Beddome's grandchildren and great grandchildren emigrated to the Americas and to Australasia, taking with them various family documents. In more recent years it has been possible for Beddome descendants in Britain to trace these. One document (taken to Canada by the children of Beddome's youngest son, Josephus) is a page of Beddome signatures seen above (sent to me by Mrs N). One of the grandchildren has written underneath each signature how this person is related to him or her. At the top of the page are two signatures - Jos Brandon on the left (underneath 'Brother of my Great Grandmama' - in other words Beddome's mother's brother) and on the right Jos Beddome (underneath 'Grand Uncle' - Beddome's brother). Below that is Beddome's signature (underneath 'Grandpapa'), below that B Foskett ('Grandpapa's Tutor'), below that Mary Bright ('Grand Aunt' - Beddome's sister born in 1720, who had married first Edward Bright then Moses Brain), below that Rachel Beddome ('Great Grandmama' - Beddome's mother) and finally Thos Ludlow ('Grand Aunt Patty's Husband' - this was the husband of Beddome's youngest sister Martha, who was known as Patty).
What is not known is whether these signatures were all done at the same time or over a longer period. Mrs N favours the former view as the one missing is John Beddome, Beddome's father who died in October 1757. If they were all done at once, this could narrow down the date because we know that Bernard Foskett had a stroke on the morning of September 9, 1758 and died soon afterwards. However, we believe Rachel Beddome died on the March 23, 1758, which narrows the date even more - to the six months October 1757-March 1758 - possibly they were all together for Christmas 1757.