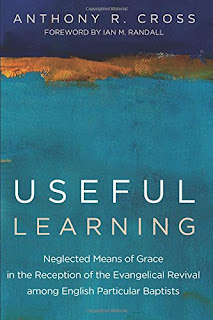 A new book has just been published under the title Useful Learning: Neglected Means of Grace in the Reception of the Evangelical Revival among English Particular Baptists. The book is by Anthony R Cross and has a foreword by Ian Randall.
It contains a section on Benjamin Beddome. The blurb says
Explorations of the English Baptist reception of the Evangelical Revival often - and rightfully - focus on the work of the Spirit, prayer, Bible study, preaching, and mission, while other key means are often overlooked. Useful Learning examines the period from c. 1689 to c. 1825, and combines history in the form of the stories of Baptist pastors, their churches, and various societies, and theology as found in sermons, pamphlets, personal confessions of faith, constitutions, covenants, and theological treatises. In the process, it identifies four equally important means of grace.
The first was the theological renewal that saw moderate Calvinism answer "The Modern Question" develop into evangelical Calvinism, and revive the denomination.
Second were close groups of ministers whose friendship, mutual support, and close theological collaboration culminated in the formation of the Baptist Missionary Society, and local itinerant mission work across much of Britain.
Third was their commitment to reviving stagnating Associations, or founding new ones, convinced of the vital importance of the corporate Christian life and witness for the support and strengthening of the local churches, and furthering the spread of the gospel to all people.
Finally was the conviction of the churches and their pastors that those with gifts for preaching and ministry should be theologically educated. At first local ministers taught students in their homes, and then at the Bristol Academy. In the early nineteenth century, a further three Baptist academies were founded at Horton, Abergavenny, and Stepney, and these were soon followed by colleges in America, India, and Jamaica.
Cross is Emeritus Director of the Centre for Baptist History and Heritage and a Research Fellow at Regent’s Park College