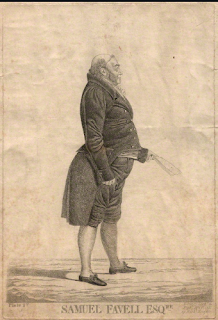 These two entries are from Dissenting Studies 1700-1850
Favell, Samuel (1760-1830) – A prominent Baptist layman, he lived for his early London years in Tooley Street, Southwark, where he married Sarah Bardwell in 1786. She died in 1795 and his second wife was Elizabeth Beddome (1765-1830), only daughter of Benjamin Beddome, Baptist minister at Bourton-on-the-Water. He partnered most likely with her brother, Boswell Brandon Beddome (he was a close friend of Benjamin Flower) as woollen drapers (Beddome, Fysh and Co., 170 Fenchurch Street) and operated a second partnership as a slopseller (Favell & Bousfield, 12 St Mary-Axe). By 1817 his business was listed as Favell, Beddome, and David.
He was present at the initial meeting of the Sunday School Society in 1785, and served as a leading member of the London Revolution Society from 1788 to its demise in 1792, as well as Society for Constitutional Information; he was the object of a satirical piece in the London Times on 22 June 1792 titled “The Southwark Slop-Seller,” signed “Sammy Slop,” a name revisited again by the Times on 4 December 1792, described as still living in Tooley Street. Favell himself would later write of these attacks (more occurred that December) on his politics and character in a letter that appeared in the Times on 25 June 1827.
He represented the Court of Common Council from 1809 through 1829. He was, like his fellow Baptists Henry Waymouth, Benjamin Shaw, Joseph Hughes, Samuel Medley, Jr., and F. A. Cox, involved in the founding of the London University, serving as a member of the first Provisional Committee formed in July 1825. He moved to Camberwell from Tooley Street c. 1794, and later was an active member of the Camberwell Bible Association. At a meeting of 8 November 1813, he was joined by Samuel Palmer (1775-1847), father of the Romantic painter Samuel Palmer (1805-81), the latter becoming a friend of Crabb Robinson and William Blake in the 1820s (see Minutes of the Camberwell Bible Association, 1813-22, MS. John Gill Papers, William B. Hamilton Collection, David M. Rubinstein Rare Book and Manuscript Library, Duke University). Most likely he attended the Baptist meeting in Camberwell during the ministry of Edward Steane.
Fysh, Mary – who joined Maze Pond on 2 December 1796, coming from the Baptist congregation at Cirencester. Her husband was Boswell Beddome’s business partner in Fenchurch Street, London (see letter 12). She died on 7 March 1804 (Maze Pond 2.ff.18, 155, 255). Mrs Fysh was also a friend of Robert Hall and may have had connections with the Baptist congregation at St Andrew’s Street (Gregory, Works 5.415-16). A notice in the Intelligencer on 28 November 1801 informed the public that a “Mrs. Fysh, daughter of Mr. Christopher Fysh of Lyon, died on Thursday sennight at her brother’s house in Camberwell,” most likely the same house in which Eliza breakfasted with Mary Fysh.