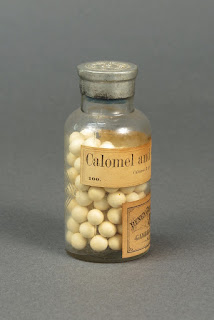 It is said that Beddome would often turn to the world of medicine for an apt illustration in his preaching.
Example 1
The bitterness of sin Jeremiah 9:18
Is there so much bitterness in sin? then be contented to take the most bitter physic to purge it away. Care not how many afflictions you meet with how much pain and sorrow you pass through if it may be but a means of tearing you from the bondage of sin. Say, Lord afflict me, slay me, do what thou wilt with me but deliver me from the tyrannical power of sin in this world and the wrath due to it in the next.
(A purgative is a strong laxative or emetic. Such purgatives were popular in the eighteenth century and were used to induce vomiting or diarrhea. A popular purgative was calomel, which is mercurous chloride or protochloride of mercury, Hg2Cl2. This was a mercury-based medicine that came in two forms; blue pills which contained a mixture of mercury, liquorice, rose water, powdered rose, honey and sugar. Blue mass was a lump of mercurous chloride from which a doctors would pull a piece. Neither method provided for standardised or measured doses.)