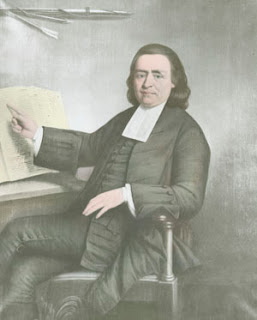 Having previous notice, the Revd Messers Whittaker and Occam came when we had a meeting at which they both preached ... after which there was a collection taken for the support of the Indian schools under the care of Mr Wheelock of Lebanon, Connecticut, also New England. The collection amounted to £30.
This is a reference to Eleazar Wheelock (1711-1779), Nathaiel Whitaker (1730-1795) and native American Samson Occom (1723-1792). Eventually Wheelock founded Dartmouth College. In a history of the college (available here) it is revealed that the £30 donation was made up of £10 10 00 from William Snooke, Esq. and only the other £19 10 00 was "collected at the Rev. Mr. Beddom's".
The Angus Library has Wheelock's printed receipt from London, which he has dated April 29th 1767. The letter is signed by Robert Keen, secretary, a London gentleman who died in 1793.
It is a marginal note that reveals the make up of the £30.
Another marginal note apologises for a previous acknowledgement being possibly misdirected.
Occom preached his way across England from February 16, 1766, to July 22, 1767. He delivered in total between 300 and 400 sermons, drawing large crowds wherever he went. By the end of his tour he had raised over twelve thousand pounds for Wheelock's project.